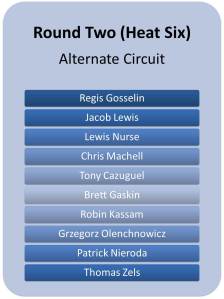 On to round two, and the brand new alternate circuit, which we will have to watch the first five heats and get as much information as possible from the drivers in those races to try to get the upper hand here.

In this heat, I meet the one driver that I have raced in both of my previous two championships, Robin Kassam. Both of the two previous occasions have been in round three and on the standard circuit. Robin currently leads 2-0 in this battle, but I am determined to at least make a fight of it this time! Also in this heat are Regis Gosselin (a finalist in last year’s BRKC), Jacob Lewis and Chris Machell, all of whom I raced last year. Last year, I managed to do the double over Chris, but I’m sure it won’t be easy to do the same this year!

I’ll be the first to admit that I have had problems with alternate circuits in previous years, but hopefully this year will be different with more experience and hopefully a clearer mind.

My predicted finishing position in this heat: 6th