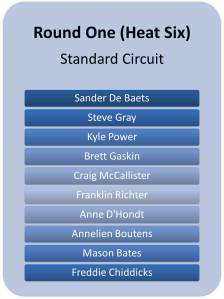 There are also some very good drivers that I haven’t met in my BRKC journey yet: Sander De Baets (who finished 24th overall last year), Craig McCallister (39th), Steve Gray (43rd) and Anne d’Hondt (51st) as well as a couple of unknown entities in this heat.