With less than one week to go until the green lights come on at the British Rental Kart Championship, what better way to start the countdown than with a preview of the championship weekend and a review of last night’s heat draw.

For those of you that aren’t aware, the British Rental Kart Championship is a weekend-long event that acts as a qualifier to the Kart World Championship. Many of Europe’s best kart drivers compete at this championship, at a venue that prides itself on kart maintenance and equality, making it one of the highest levels of competition in indoor karting.

100 drivers (a BRKC record) will line up on the morning of Saturday 16th, and by Sunday evening, one driver will be able to take the top step of the podium with the knowledge that he/she has beaten the rest to grab the £1000 top prize.
But to be crowned champion, they will have to navigate four tricky heats (each with single flying lap qualifying followed immediately by a race of 20 minutes including a compulsory pit stop), a semi-final (following the same format as the heats) and the grand final (individual qualifying in the same kart followed by a 30 minute race with two mandatory pit stops).

The entire event will be broadcast live, with full commentary and driver interviews, so if you can’t be there, you can still experience the speed and atmosphere of the championship from your armchair at home.

This year, there are a few rule changes, most notably the new laser activated pit stop system – FLAPS (as a laser engineer, I am particularly excited about this!). To remove the human judgement element of the mandatory pit stop from previous years, a simple laser system has been implemented at the entrance and exit of the pit lane, where the beam must be blocked by the kart for a given amount of time before you are allowed to move off. There are a few different methods of performing the pit stop element during the races; I have been discussing a couple of these methods and have my plan A and B ready for the Friday practice session.

Unlike last year, when I was very inexperienced and went into the championship on the back of an illness (I’m not using the illness as an excuse, I was thoroughly outclassed and would have been either way!), I have been racing for the past year with a clear goal; to go to the BRKC this year and perform better than I did in my debut in 2015. My preparations have gone well; I’ve lost about 35lbs in weight from last year (1st 9lbs since October), bringing me under the 90kg minimum weight for the first time in years, I’m generally fitter than I was and have been very competitive in my kart races around the country against both lighter and more experienced drivers.

Last night (8th January) the draw for the heats of the BRKC was streamed live from Formula Fast in Milton Keynes, and I watched with baited breath on YouTube alongside a considerable number of competitors. Despite the difficulties with the new automatic heat spreadsheet throughout the evening, there really was an air of excitement from the drivers. Unfortunately, due to the length of the draw and one of the stoppages, I missed my name being drawn (I picked up the stream after three more names after mine had been pulled out of the bag).

Eventually, the draw was completed (see the image below for the complete draw) so I then knew who I would be racing next Saturday and Sunday in the first four rounds of heats. 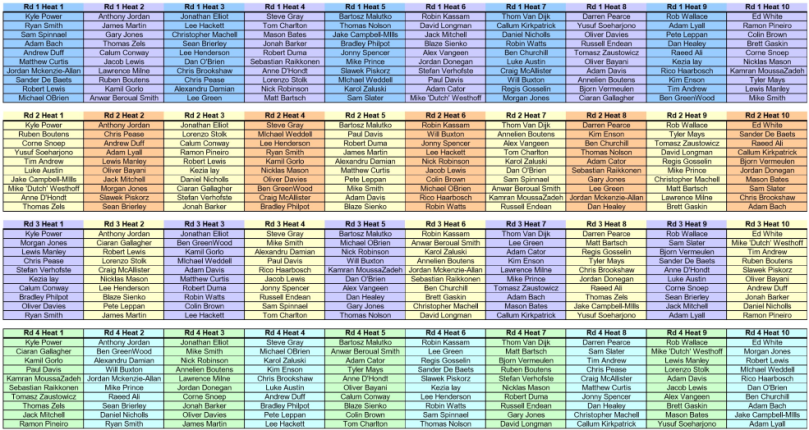 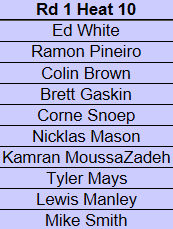 I’ve got quite a wait from Friday practice to kick my championship off with a bang, and what a line up in this heat!

Ed White (3rd place last year overall, but won every race leading into the grand final), Ramon Pineiro (multiple Spanish rental kart champion), Corne Snoep (masses of experience in the kart world championship amongst others), Lewis Manley (3rd place overall in BRKC 2014, and at his home track where he holds the lap record) and Colin Brown (Formula A World Champion) are formidable competitors and it will very exciting to be racing against these drivers.

I would love to break into the top 5, but I think this is going to be near enough impossible with the standard of drivers there.

My predicted finishing position in this heat: 8th 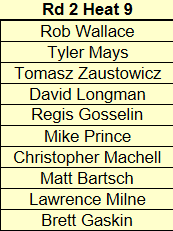 After my first round race, I have another long wait until my second heat, this time on the alternative layout.
I meet up again with Tyler Mays after our round one heat, but the one name that really stands out for me in this heat is Matt Bartsch, who won three out of four heats last year and finished 7th overall.

From the November practice session, the alternative layout doesn’t suit my driving style, but if I’m to achieve my target of getting in top 50, I will have to make as many points as possible on the second and fourth rounds – there are no easy points to be had in the BRKC. 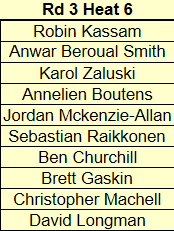 Back to the traditional circuit layout, provisionally first thing on the Sunday morning, I will be racing David Longman for the second time this championship and meeting Anwar Beroual Smith, as I did last year in the heats.

From the line-up, I think there will be a fight (figuratively not literally) between Anwar and Annelien at the front; I feel that qualifying and track position will play a big part in deciding that place.

As this is the last round on the standard layout, I will be pushing hard for every point here, but I predict there being lots of mini-battles throughout the field from 4th to 10th place and this is where a well-timed pit stop can pay dividends.

The last chance to stake a claim for a semi-final place on the alternative layout and, with only one more heat after this before the semi-finals, things will begin to look clearer for many drivers knowing what finishing result they need to make an impression on the leaderboard.
My BRKC heats will be bookended by racing Lewis Manley again, who I think will be the one to beat in this race.

A lot of new names (to me anyway) in this heat, but I do get to race Alex Vangeen competitively for the for the third time in the past two BRKCs (I was also alongside him for my two practice sessions last year); hopefully it will be closer than the last time, where I remember waving him through to put a lap me on quite a few occasions.

My predicted finishing position in this heat: 6th

If I were asked to give some tips for the debutants (having been one myself last year), they would be to:

Leaving the blog post and predictions aside for a moment, I’m looking forward to just racing throughout this weekend – this is my chance to see the progress I have made in the past year and see if I can mix it with the big guys.