Following straight on from my exploits in Birmingham, I had arranged to take part in a 50 lap race at F1K Loughborough, on the following day. I had never been to this venue either, so it was another completely new experience for me. But unfortunately, it is not a track I’ll probably be revisiting.

I turned up an hour early for my race because the weather was terrible, I didn’t really know where I was going and I wanted to make sure that my Grandad was comfortable at the track too. This was my Grandad’s first visit to a karting track and, therefore, the first time he had had the opportunity to watch me kart, despite him being very supportive in my “career” to date.

When we arrived at the front desk, there was nobody in the office and despite ringing the bell three times, it was a long time before anybody came to book me, and the other group who had just arrived, in.

It looked, on paper, like a fast circuit; there were no complicated turns every corner was either at 90 degrees or a hairpin bend and having the bridge and a long straight after the down ramp meant that you could build up a great deal of speed for the second half of the lap.

The karts seemed to be good from a distance and I was looking forward to it into the safety briefing. One thing that disappointed me from the start (and I know this is at numerous karting venues now) is that chest cameras and helmet cameras were prohibited.

At the end of the safety briefing, there was an off-hand comment that the track on top of the bridge was quite bumpy, so be careful. I wasn’t too bothered by this, I thought that experience would play into my hands.

We were told that we would start in a random kart and the first person to complete 50 laps would be the winner (it was that simple). I started in the fifth kart of eight, so in order to win, I would have to overtake at least four drivers on the circuit. I actually only NEEDED to pass three on the track, although I lapped some of them a lot more times.

It was quite an interesting start; one of the karts in front of me didn’t want to go at all (according to the printout it only managed to complete one lap with a top speed of 6.8mph and took 3 minutes to do it). As a result, the start of the race was littered with yellow flags mainly because of this kart being pushed around part of the track. I should have guessed from this experience not to try to push my kart as much, however, when you’re racing it’s far easier to say that than do it.

It was particularly bad on the bridge where going slow or fast didn’t do anything to reduce the kart doing what it wanted to do; it took a lot of strength to keep the kart from going into the barrier every time I turned into the hairpin on the bridge.

According to the printout, I wasn’t the fastest driver there but I was certainly the most consistent and could take a line into the hairpin at the bottom of the bridge that nobody else could take. During a yellow flag in the middle of the race, another driver pulled alongside me and asked me how I managed to carry so much speed through the hairpin bend at the foot of the bridge. I wasn’t going to give him any tips during the race, but I did tell him afterwards the technique that I was using.

One positive from this venue is that it provides you with a top speed as well as your two best lap times during the race (my stats: I reached 50.7mph and achieved my best lap time of 24.872 seconds on lap 28 of 51).

It was a bitter-sweet experience; I was very pleased to win and, other than the “Fianium Grand Prix”, this is my first real race win (a small trophy is being placed in my “cabinet”), although this has come at a price (I am now paying for it with big bruises on the insides of my knees and strains and shooting pains in my arms). 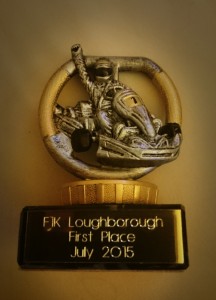 There’s clearly potential for this venue, but it just seemed sloppy in comparison with the other places I have been karting over the years. I am tempted to visit a different F1K venue in the future to see if that is any better, but that won’t be for a while.