This week was my first karting session in a while, so I expected to be a little ring rusty, but still to perform well. It was also my first race in my new racing suit, which was very comfortable to race in (and the internal padding prevented me from waking up with any bruises this morning!).

So on to the three sessions last night. Lots of yellow and red flags in general and I got a couple of “No bumping” boards shown at me (some justified, some not in my opinion). 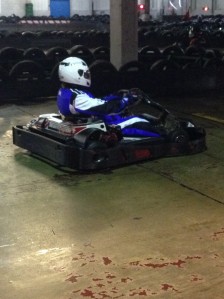 The first race was pretty uneventful, I achieved my fastest lap of 31.085s, finishing in second place, 4/1000ths of a second ahead of the more experienced driver in the field, an achievement that I was quite proud of at the time.

The second race was a lot more aggressive and frustrating in equal measures. I set off second out of the pits and had five laps of clear track in which I set my fastest laps of this race (31.498s on both lap 4 and 5). After this however, I got caught in traffic from those who started behind me in the pit lane.

In fact, there was one driver in particular that I was ridiculously frustrated by; lapping about one to one and a half seconds per lap slower than I would have been, but taking defensive lines through every single corner and always finding himself having the inside line at the end of the series of bends when I pulled alongside him. It was the frustration of a number of laps behind him that caused me to start to make overtaking attempts that really weren’t there to be made (I did take the defensive driver off on a couple of occasions, which earned me the “No bumping” warnings). However, each time I did, I let him back in front afterwards (I may be competitive, but I am fair in my racing). 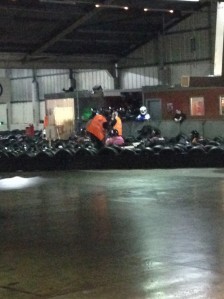 In between the second and third races, one of the other drivers came up to me and chatted to me briefly about karting in general and the previous session. He said that he looked behind him when I was charging through the field again and thought ‘Shit!’. He then described that for the rest of the race he was determined to keep me behind him at any cost. It was then that I realised it was the driver who had held me up for 17 laps of the previous race!

Actually, this attitude was brilliant for me to practice my race craft, rather than go for a fast single lap.

In the third session, I thought that I would go for the race practice rather than the time trial practice. I started off first from the pit lane and after being overtaken once by the more experienced driver, I set off carving my way through the field lapping each driver as I came across them on track. It just so happened that the hardest guy to overtake in the second race was also my rival in the third.

He wasn’t going to give me an easy ride and I couldn’t pull a reckless manoeuvre up the inside of him because he wasn’t going to give way. What I needed to do was be brave and be very late on the brakes and also feign the route that I was going to take through the corners to make him defend a different line. Whatever I did worked and I managed to cleanly overtake him a couple of times before the time ran out in addition, I achieved a 31.290s fastest lap in this final race.

I was quite disappointed with my lap times when I got back home last night, but having analysed them on my spreadsheet today, actually it was a successful night in many ways.

I log all of my lap times and plot a variety of things including fastest lap times, mean lap times, variance/standard deviation etc. (this is my geekiness/scientist coming out!). Last night, whilst slightly slower than usual, was one of my most consistent nights for a month.